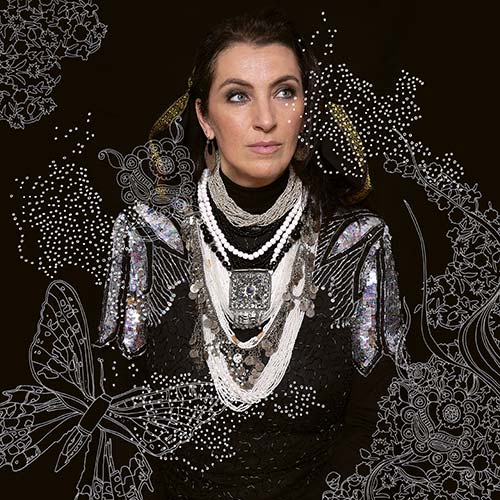 The first part of the album, Session Tapes #4, was recorded in June 2019 in the Netherlands with Riad Abdel Nabi from the Van Sonic Sound Collective. The recordings were completed in the hallowed halls of Amsterdam’s Studio 150, which has also hosted great like Al Jarreau. The multi-instrumentalist and film composer Abdel Nabi had invited Boutari to Amsterdam, the two having played together in various bands twenty years ago. The two wanted to use their past to create a new present while reflecting on their multi-national backgrounds (Abdel Nabi is Syrian/German, while Boutari is Egyptian/German). Their collaboration generated a four-song cycle inspired by the streets of Damascus and Cairo and even though some of those streets no longer physically exist they live on in memories; the cycle then reaches out across the seas towards Amsterdam and Hamburg. It is a story that tells of beauty and memory, new beginnings, crisis and redemption. During the recordings, Catharina was supported by the young jazz double bassist Nathan Wouters from Rotterdam.

August saw the recording of Session #5, a Session Tapes special edition, in Hamburg’s legendary live venue Logo. Sparring partners on that occasion were the guitarist and singer Ben Schadow (Rhonda, Dirk Darmstaedter, Bernd Begemann), jazz singer Ulita Knaus and vocalist and actor Katrin Ost (August, August). The club was turned into a temporary home where Catharina and her gang rehearsed during the day and played their material live at night. On the penultimate day of their residency, their performance was recorded before a live audience. The session produced another seven songs rooted in the present day that provide a fascinating outlook into the future. Power to the people. A class reunion with friends. A new blueprint for the world that grapples with the big questions: What kind of people do we need in the world? How should we be? Where do we want to go?

"Especially the song "Precious" stands out, immediately becoming an earworm. An uptempo number that captivates with soulful choir vocals...There are many little indie pop pearls to be found, with a sure taste in instrumentation and sounds. An album that could well have come from the environment of the Belgian band dEUS, considering playfulness and experimentation."
Schall & Ton 3 | 20

Sequels are not only popular in times of #staythefuckhome. This is also true for the Session Tapes of Catharina Boutari aka Puder, who recorded the fourth part of the series this time as a trio with vocals, keys and double bass in Amsterdam. The opener "Streets" sets the direction for the four tracks, which here have so nothing of the pudertypical NDW touches, but in their dark downtempo mood rather remind of Neneh Cherry's Man. With water and sugar and honey and salt there is again such a syrupy powder breakdown dripping from the spoon, of which one wishes it would never break off, also an awe-inspiring church organ ("Interlude"), the exotically clubby declension of key verbs like non-being or being free ("Resisting Water"), and an opulent drum-and-bass stumblebeat whose Highest hopes/brightest firesparks refrain lingers in the ear long after the record fades out. If you're still receptive, you'll push the fifth part behind it, which was created with singer Ulita Knaus in Boutari's hometown of Hamburg, among others, and feels like a day-at-the-sea song paired with a Knef hit with "Flugverbot," in order to unleash Puder's greatest strength on "When You Were Eight": those choruses! Then there's a modern high-noon scenario where you're really waiting to see who draws first ("Seven"), and the wonderful insomnia anthem "Sleepless," as breathtakingly fast as the thought carousel that prevents you from falling asleep. Hopefully the next season won't be long in coming!
Victoriah Szirmai | Jazzthetik 5 / 20 | 4,5 von 5 Sternen

If you don't want to miss anything, you can subscribe to my newsletter.